Iron is an essential trace element that must be included in the diet. Meat is the most important source of iron for the human body because it contains iron in an especially well utilizable form by the body. Also, in cereals such as, millet and oats, wholegrain bread or vegetables such as Brussels sprouts is iron to be found.

Vitamin C is a water-soluble vitamin and cannot be formed by the human body and has many effects in different metabolic areas.

IC Direct® was developed as a food supplement especially for those who have an increased need for iron and vitamin C or through the diet are receiving an insufficient amount thereof.

The modern administration form as micro-pellets in convenient sachets allow easy taking on the go and without water. The pellets are placed directly into the mouth and dissolve there quickly – without the addition of water! 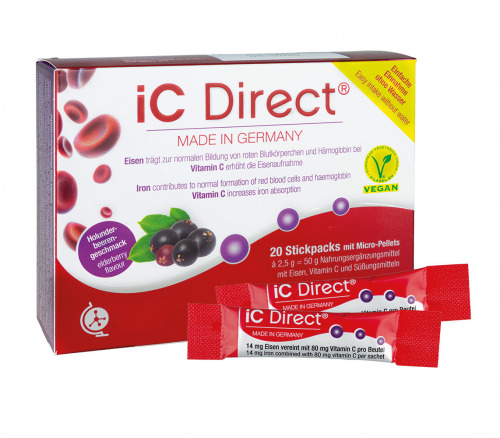